Small cell-like change (SCLC) is a rare prostate lesion which has been described in only two previous studies (total of eight cases). Its relation to possible neuroendocrine differentiation remained unclear. We evaluated 11 SCLC cases with immunohistochemistry and electron microscopy. SCLC was characterized by crowded hyperchromatic small nuclei with scant cytoplasm, rosette-like structures, finely granular chromatin with indistinct nucleoli, and lack of mitoses, apoptoses, and necroses. In nine cases, SCLC was admixed with high-grade cancer, and in two cases, it represented a separate intraductal process, spatially remote from a low-volume Gleason score 6 (grade group 1) cancer. Only 2/11 SCLC labeled for synaptophysin, chromogranin, and serotonin, although 6/11 were at least focally positive for TTF1. Staining for NKX3.1 and pancytokeratin was typically weak, focal, and markedly reduced compared to the adjacent cancer. SCLC was positive for ERG in 1/8 and for racemase in 6/10 cases, again typically in a focal and weak fashion. There was no immunoreactivity with CD56, p63, or HMWCK. Ki-67 highlighted only rare nuclei (<1 %). No neuroendocrine granules were demonstrated by electron microscopy in four cases that showed no immunoreactivity for neuroendocrine markers. In summary, SCLC is more frequently found in high-grade prostate cancer, but it may also be encountered as a noninvasive lesion in Gleason score 6 (grade group 1) cancer. Importantly, it does not appear to indicate neuroendocrine differentiation. The low-grade cytology, the lack of mitoses and apoptoses, and the minimal Ki-67 reactivity are findings to support its discrimination from a small cell carcinoma. 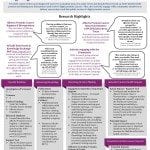 This impact brief  summarizes team accomplishments from 2013 – 2015 and that will be presented to the Ministry of Health.