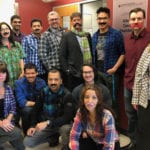 Together we are improving prostate cancer diagnostic and treatment options

We have an update on our moustaches for Movember (It’s Movember time to grow a mo for a bro!) and we coordinated our plaid (for Dad) at the same time! Hopefully, your Movember was as successful. APCaRI wants to send a thank you to Movember and Prostate Cancer Canada for their Men’s Health Awareness Drives. How else can we get our moustaches AND plaid on at the same time!
In the spirit of gratitude, APCaRI also recognizes our research staff for their hard work and dedication to improving prostate cancer care and future outcomes AND the nurses, oncologists, and urologists who work every day to help the men and their families touched by prostate cancer. Please know that your devotion to the patients and their treatment needs is greatly appreciated.