The purpose of this study was to characterize benign prostate-specific antigen (PSA) bounces of at least 2.0 ng/mL and biochemical failure as defined by the Phoenix definition after prostate brachytherapy at our institution, and to investigate distinguishing features between three outcome groups: patients experiencing a benign PSA bounce, biochemical failure, or neither.

Five hundred and thirty consecutive men treated with low-dose-rate brachytherapy with follow-up of at least 3 years were divided into outcome groups experiencing bounce, failure, or neither. A benign bounce was defined as a rise of at least 2.0 ng/mL over the pre-rise nadir followed by a decline to 0.5 ng/mL or below, without intervention. Patient and tumor characteristics, treatment variables, and PSA kinetics were analyzed between groups.

Thirty-two (6.0%) men experienced benign bounces and 47 (8.9%) men experienced failure. Men experiencing a bounce were younger (p = 0.01), had a higher 6-month PSA level (p = 0.03), and took longer to reach a final nadir (p < 0.01). Compared to the failure group, men with bounce had a lower pre-treatment PSA level (p = 0.01) and experienced a rise of at least 2.0 ng/mL that occurred sooner after the implant (p < 0.01) with a faster PSA doubling time (p = 0.01). Only time to PSA rise independently differentiated between bounce and failure (p < 0.01), with a benign bounce not being seen after 36 months post-treatment. Prostate-specific antigen levels during a bounce reached levels as high as 12.6 ng/mL in this cohort, and in some cases took over 5 years to decline to below 0.5 ng/mL.

Although there is substantial overlap between the features of benign PSA bounces and failure, physicians may find it useful to evaluate the timing, absolute PSA level, initial response to treatment, and rate of rise when contemplating management for a PSA rise after low-dose-rate brachytherapy. 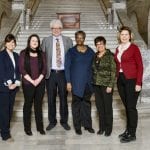 Member of the APCaRI training program, Dr. Anais Medina Martin, selected as a remarkable woman for the International Women’s Day at the Caucus Meeting in Edmonton

Last March 8th, 2017 the Legislative Assembly of Alberta held a special session in order to celebrate the International Women’s Day in our province. Some of Elected Members of the Assembly invited one or two women from their constituency with an outstanding story to be celebrated in that special meeting. Among of that exquisite selection, Dr. Anais Medina Martin had the honor to be chosen, together with Mrs. Yvette Labiuk, as a member of the Department of Oncology at the University of Alberta.  This support is again reaffirming the personal potential that we host at the APCaRI.